In terms of inspiration and content, our company maintains a strong links with the area in which it operates.

It is the sort of marriage that comes through dialogue with nature, architecture and local craftspeople.

The Valtiberina, as well as more recently the Brianza and Canton Ticino are a source of elaboration, discussion and representation, for us, this is a rich environment for research and the reworking of ideas.

They show to the potential, exclusive customer-tourist an attraction to the landscape and the environmental. Out of this association and an eventual visit to our showroom, as well as from the point of view of food and wine, they demonstrate the great traditions of the area.

Below are some descriptions and guides that explain to visitors about these wonderful lands. 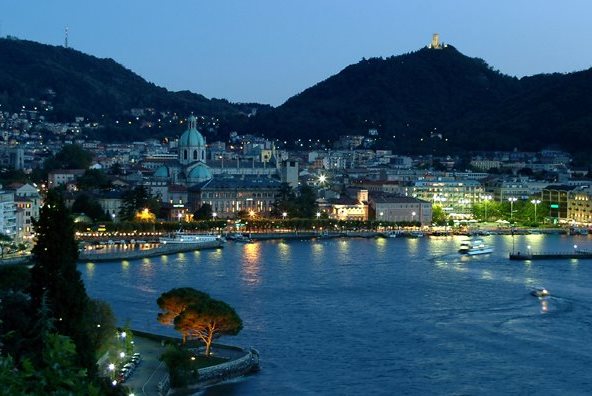 Como is an Italian town of 84,834 inhabitants and is the capital of Como Province in Lombardy. It is the fifth most populous municipality in the region after Milan, Brescia, Bergamo and Monza.

The city center is situated on the lakeside promenade, around the Piazza del Duomo, one of the largest cathedrals in northern Italy. The old town still has the appearance of the original Roman fortress, with well-preserved medieval walls and large watchtowers.The classical authors attribute the founding of Como to the lineage of Orobi.

During the High Middle Ages, Como was invaded by the Goths and the Lombards; then in 951 the Emperor Otto I invaded Lombardy.

During the medieval period, Como was disputed between rival families of Rusca (o Rusconi) and Vitani. Following decades of war (1118-1127) between Como and Milan, Milanese forces besieged Como on August 27, 1127, destroying the walls and homes and dispersing the villagers.

in 1158, with the help of the Emperor Federico Barbarossa, the Comune rebuilt the city destroyed by the Milanese, rebuilding and enlarging the defense walls with their imposing towers of Porta Torre, San Vitale and Porta Nuova (or Torre Gattoni).

In October of 1525, Como was occupied by Don Pietro Arias.

In 1694 in Como was the ordination of the Jesuit priest Giovanni Girolamo Saccheri, father of non-Euclidean geometries. Since then he followed the fate of the Duchy of Milan and of the Lombardy-Venetia Kingdom.

In 1768, physicist Giulio Cesare Gattoni erected in the city the first Italian lightning rod. In 1797 Napoleon arrived and announced at Villa Saporiti the establishment of the Cisalpine Republic. On May 27, 1859, following the Battle of San Fermo, Giuseppe Garibaldi in command of the Cacciatori delle Alpi freed the city from Austrian occupation.

In 1899 Como hosted a large Voltian Exhibition to celebrate the 1st anniversary of the invention of the battery by Alessandro Volta (1745-1827), its most famous citizen.

In April 1945 the city was the scene of the flight and events related to the arrest and shooting of Benito Mussolini and the epilogue of the fascist regime.

The fifties and sixties are remembered for the work of the mayor Lino Gelpi, who did his best to beautify the city, dismantling the freight of the State Railways, putting in place the park on the lake, and creating the Villa Olmo promenade. He also covered the stream Cosia with a large arterial road – the so-called “ring road” – to try to free the center from traffic jams.

A border town straddling different cultures, Como is the “capital” of the lake, which attracts international tourism related to the natural environment, and is an industrial center based on the industry of silk.

Lake Como in Lombardy is a glacial lake, belonging to the provinces of Como and Lecco. With its 416 meters of depth, it is one of the deepest lakes in Europe and the third largest lake in Italy. It has a characteristic shape of the letter “Y”.A walk through the historic center allows tourists to experience the atmosphere of a medieval town, to discover evidence of the Renaissance and Baroque periods, and to be amazed before the most recent and famous buildings of Rationalism. And, finally, to be enchanted along the beautiful promenade lake with classical forms of aristocratic villas.

Valtiberina is a valley located between Tuscany, Umbria and Romagna, crossed by the river Tevere .
The name Valtiberina properly refers to the wide basin created by the river Tevere that extends from Montedoglio until reaching Santa Lucia, a small town in the south of Città di Castello.
This name is commonly used as a synonym of the Alta Valle del Tevere . In geographic , social and economic terms, it is a single basin with about 109,000 inhabitants .

We usually distinguish between Tuscany and Umbria Valtiberina, according to the division established during Middle Age in 1385-1441.
Alta Valle del Tevere extends from the Municipalities of Anghiari, Badia Tedalda, Caprese Michelangelo, Monterchi, Pieve Santo Stefano, Sansepolcro, to Sestino.

The most famous town of Tuscan Valtiberina is Sansepolcro
Situated on the upper reaches of the Tiber river, the town is the birthplace of the painters Piero della Francesca, Raffaellino del Colle (a pupil of Raphael), Santi di Tito, and Angiolo Tricca. It was also the birthplace of the Italian mathematician Luca Pacioli, and of Matteo Cioni, who translated into Latin Piero della Francesca’s treatise about perspective in painting (De Prospectiva Pingendi).
Piero della Francesca , one of the most famous artists of the Italian Renaissance , was born here. Manhy of his famous works are exposed in Sansepolcro, in chuerces and in particular ìt the Civic Museum where is exhibited his masterpieces: the “Resurrection of Christ ” ( c.1460 ) , the ” San Giuliano ” ( 1454-1458) ,” Altarpiece of Mercy ” ( 1444-1464 ) . It is also interesting to visit the House- Museum of Piero della Francesca , an elegant architecture that seems to recall the style of Michelozzi ( 1396-1472 )

According to tradition, the town was founded around 1000 AD by two pilgrims, Arcanus and Aegidius, who brought a stone from the Church of the Holy Sepulchre (thus, San Sepolcro) with them from the Holy Land. They founded an oratory dedicated to Saint Leonard, on the site of the current Cathedral.From 1415 to 1420, Sansepolcro developed around the chapel.

The first historical mentions of Sansepolcro are slightly later, referring to the Benedictine Abbey, the “Badia”, around which the walled commune clustered. During the conflicts between Guelfs and Ghibellines, the town’s factions were headed by prominent local families, including the Pichi, Bercordati, Graziani and Bacci.[1]
The city was ruled from Citta’ di Castello, Milan, then by the Papacy; in 1367 Pope Urban V gave the town and its surrounding contrada to Galeotto Malatesta family, whose heirs ruled it until control was assumed by Florence.
During World War II the town was saved from destruction by the efforts of Tony Clarke, a British Royal Horse Artillery officer who halted the Allied artillery attack in order to save Piero della Francesca’s fresco Resurrection.[2]